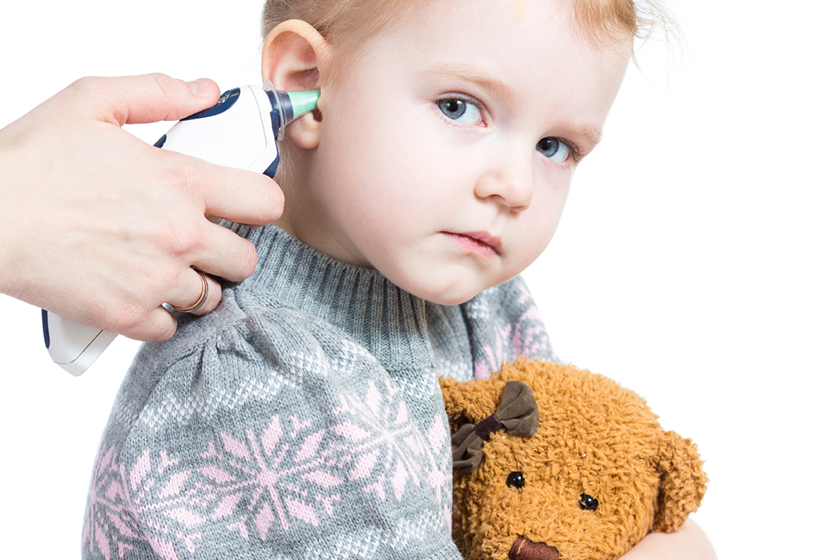 What is an ear infection?

Otitis media, the medical term for middle ear infection, affects about 2 in every 3 children by age 5 and results in millions of doctor visits each year.

Ear infections occur when the eustachian tube—the narrow passage connecting the middle ear (the small chamber behind the ear drum) to the back of the throat—becomes blocked. When children are healthy, this tube fills with air that keeps the space behind the eardrum fluid-free. Sometimes fluid can accumulate in the middle ear. This increases pressure on the ear drum, which in turn causes ear pain, and it may provide a favorable environment for bacteria or viruses to grow. Infants and young children have short, angled eustachian tubes, making them most susceptible to ear infections between the ages of 6 months and 4 years. The tubes, however, become longer and more vertical as children grow, so bacteria have a harder time reaching the middle ear, and middle ear infections become far less common once children enter kindergarten.

What are the symptoms of an ear infection?

The American Academy of Pediatrics (AAP) recognizes that “holding, tugging, [and] rubbing of the ear” may be a sign of ear infection in a non-verbal child. However, this isn’t a foolproof sign of infection. Babies, especially those under 1 year of age, may pull at their ears because they are teething or simply because they’ve discovered that their ears can be fun to play with.

How are ear infections treated?

While examining your child’s ear, his pediatrician will determine whether there is inflammation and fluid behind the eardrum. If the ear is infected, the doctor may prescribe an antibiotic to kill the bacteria and reduce the fluid buildup. However, antibiotics may not be necessary. In fact, according to the AAP, many ear infections will resolve within 10 days without antibiotics, since most ear infections are caused by a virus.

The AAP provides guidance on when antibiotics should be prescribed, as well as when a “wait and see” approach is better:

There are steps parents can take to minimize the pain associated with ear infections. Although few studies have been conducted on home remedies, your child may find some relief from a warm, moist washcloth placed over the ear. Prescription eardrops may numb the eardrum and help relieve pain. Your child’s doctor may also recommend acetaminophen or ibuprofen (over-the-counter medications) to ease fever and pain. Be sure to check medication dosages with your child’s doctor, since the appropriate dose for young children is based on weight rather than age. Also, never give aspirin to children with a viral illness, since this has been linked to Reye’s syndrome, a rare but serious illness.

How can ear infections be prevented?

Most ear infections will go away on their own, if left untreated. However, because complications can occur, it’s advisable to seek medical attention if your child’s symptoms last more than a day or two. You’ll also want to see the pediatrician if your child complains of severe ear pain, is sleepless or irritable after a cold or other respiratory infection, or has fluid (such as pus or blood) coming from the ear.